Well I’m finally back at it. Life as usual has been hectic. My wife is on day shift now, so she’s got a normal schedule which means my post-work rides are a bit more limited. Not too big a deal, cause she likes to go out on the bike with me.

Yesterday I was planning to take a ride out to my parents cabin an hour south of Lacrosse, WI. From my place it’s about a 3.5 hour drive. I figured I could leave early enough to get there, and be back home in time to make some dinner. The weather, my GPS, and my apparent lack of sense of direction had other plans.

I left my place at about 8:30am, got about 5 minutes down the road, only to have it start to rain quite heavily on me. I stopped in at my local skatepark where there is a shelter and tossed on the rain gear. I more or less couldn’t see jack until I was about 10 minutes North of Lake Geneva. I was planning to scoot as quick as I could to Janesville, WI, grab gas, and then take a new route West over to my parents place.

My brother called and said he left a bit behind me in his miata, so we’d try to meetup somewhere along the way. My route had me going through Dodgeville, WI, so I said lets meet there and rock on. Unfortunately my navigational systems were not working. I took a turn too soon in Janesville off of rte 14. I found myself who knows where, trying to follow God only knows what route, and with a bladder that had to be relieved of the gatorade & coffee it had ingested earlier.

I made a pitstop off some backroad and gave my brother a ring. I was watching my clock and realized there was no chance I’d make it out to my parents place and back home in time to make dinner, so we made the executive decision to stop in New Glarus, WI for some lunch. I worked my way along a few back roads to get myself to ummmm 59 or 69 or something like that, which heads North into New Glarus.

Things got real for me at this point. I came to where I’d make a right onto the main road. I saw 2 cars off a bit in the distance working their way towards me. I thought at first…..they’re far enough away, I can accelerate and it’d be no big deal. Then I thought….eh, my brother is a little behind me, and I’m in no hurry, lets just chill, let them go, and cruise behind them.

That choice was a ride saver. About a mile down the road 2 small deer decided to jump out right as the lead car came up on them. You couldn’t see them at first due to them being as small as they were and with how tall the grass was. The lead car nailed one of them sending it spinning down the road. The car behind the lead car more or less just drove around the lead car after they moved to the side of the road. I pulled over and talked to the woman. She was OK and relayed she was glad it was her that hit the deer and not me. Needless to say, I felt the same way.

The ride into New Glarus from there was only a couple miles, so in a way it felt good to be in the relative safety of a small town, and theoretically less wildlife. My brother and I grabbed some lunch, and worked on a route that would take us back home following some back roads.

I relayed to him that I found I am having troubles coming to grips with riding the Ducati on the street. The bike is no slouch, it is plenty fast and I’m wondering if that is the “problem”. As I roll through turns, the bike feels it is going incredibly slow. A quick glance at the speedo tells me it’s not, but it just feels that way. I find myself constantly worrying about the gravel in the roads, and with yesterdays weather, all the dark\wet spots (notably the locations where people decided to shoot their grass clippings into the street). I explained that I don’t have these thoughts or concerns when I’m on my KTM, even with full on knobbies. I can feel with the knobbies the tires rolling and beginning to slide. I don’t get that same feedback with street tires.

I’m sure it’s a combination of not having road raced in a long time, a high power street bike, and just still early in the season to be 100% comfortable with pushing a bit. Or maybe I should go back to a lower power street bike.

This thing cruises so smoothly at highway speeds that its hard to dislike, yet I keep finding a way.

On the way back, we managed to end up on a Rust Road that I hadn’t nabbed yet. RR81. I honestly don’t remember what it was all like. More narrow and covered with trees, opening up at the end where it meets 39. 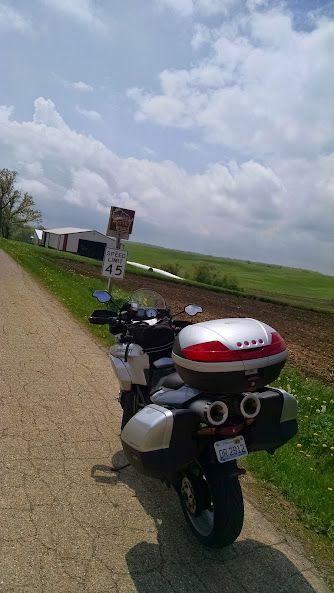 We took some Wisconsin Lettered Roads on home, with us testing a camera setup my brother has been working on for awhile. We managed to capture a pretty rad shot:

And with that, the sun seemed to creep out, giving us a real nice cruise home. After a 250+ mile day, I was back home by 4pm and was able to begin prepping dinner.

Edit – Footage from the camera while mounted on my brothers car.