Got back into racing dirt last year after coming from Trials. Went from a 2001 KTM 300exc that was a great “open area” bike. Not so great for our tighter Harescrambles (my opinion). Swapped that for a 2004 YZ250F thinking the 4T power would be great for racing. Raced Indy Endurocross on that and then decided that I wanted to go back to 2T. I wanted something that felt like my trials bike. Something I didn’t think twice about what I was doing in the woods. 125 2T it was. Unfortunately I traded my bike for a POS 2004 YZ125. Would have been fine had the original owner(s) taken care of it, but alas…..they did not. I’ll post up here what I’ve done\will do to make it my competitive machine. I’ll be competing in D17 Harescramble Series B class.

Be forewarned that while I do occasionally take pictures of what I do on the bike….I don’t always, and when doing general maintenance\things like that….I generally don’t take pictures due to not wanting to get grease\crap on my camera. I also find that while out riding I do a horrible job of taking pictures. I now have my own GoPro, so there will be testing\tuning\practice video. Everything seems fine, but right off the bat, I notice some issues.  For one, the forks aren’t in the greatest shape, the steering feels notchy, the tires are shot, and the frame is unusually rusty.  WTF have I gotten myself into?  And why the crap did I trade an essentially pristine YZ250F for this thing? (I’ll spare the 4T vs 2T battle for the track)

Day before my first time out on the bike, I decide to pull the triples and am greeted with the following: Ok.  No biggy.  Needed to ride that weekend, so went to a local dealer and swapped them out.  Killed some hearing in my left ear while pounding the races out.  Wear hearing protection kids!

Finally got to do a real shakedown of the bike @ KI Tracks in Oregon, IL.  Oddly enough, I don’t have any pictures of me there.  I do have this brief video ( hopefully ya’ll can see the thing) from my buddies cam.  He’s on a KTM 250SX.  I show up around the 2:30 mark. VIDEO.

Things I learned from that ride:  1.Forks were toast.  2. Don’t ride in muddyish conditions with a half-assed rear fender…spend the 25$ on a new one!

Now I know that I’m a bit big for stock suspension @ 190 pounds without my gear, but I know the bike shouldn’t so easily bottom out purely under breaking.  The power of the bike felt quite nice, and the Shinko 520 tires hooked up very well in the tacky soil.  Unfortunately towards the end of the day, I heard what I presumed to be piston slap.  I shook it off as me “hearing things. Both fork tubes pitting nicely.  From what I gather, it’s rust from beneath the coating coming out, because it wasn’t localized to where rocks would hit the tubes.  I busted out some fine grit sand paper, smoothed them out, and got on with the project: I got the bike all put back together, and it was time for a shakedown at some local trails.  Again, I don’t have pictures of this, but the bike felt incredibly planted while riding.  I was able to ride all out with complete ease, and was able to take greater hits on the front without bottoming out the fork.  The bike felt like a complete winner (in a good sense) after that shakedown.  Unfortunately, I was for sure hearing piston slap and decided to pull the top-end.

Big surprise, the cylinder was out of round.  More so at the bottom of the bore than the top.  I figured why risk things….Lets get a big bore!

Enter Eric Gorr.  Eric is about an hour and a half North of me, so I pulled the engine and loaded up that and the wife and headed north! Dropped off the motor and went to do some mall browsing with my Wife and kill some time before picking up the fresh engine from Eric.  I headed back to pick up the engine, to be informed of the bad news.  Mr. Crank was Mr. Toasted!  haha.  Well I wanted to ride in 2 days, so it was time for some over-nighting of parts (from Japan?) and some quick handy rebuild work. (Sorry, not a single pic of the rebuild.  I guess I was focused. haha)  At this point, I also tossed on a 14T front sprocket as suggested on Thumpertalk.  Apparently the 144 has the extra giddyup to take care of the taller sprocket, so I did it to it.

Things were looking great.  Bike got back together in very little time.  Engine rebuild was super smooth.  I felt confident that the bike would kick right over….sure enough it did.  All the better, I was ready to ride for that Saturday.  Originally had planned to go back to KI Tracks when my neighbor walked over while I was loading up the bikes.  Would I like to ride at their track 5 minutes from my house…..Why yes I would!  Off to the track!

The bike needed proper breaking in.  So MotoMan Break-in it was.  If you think he’s wrong…I don’t care.  He know’s what’s up, and that lil 144 had some scoot.  Unfortunately I decided to man-up and hit one of the doubles on the track.  Now don’t get me wrong.  I’ve jumped plenty of jumps that were longer in distance than this one, but the track was more SX style with steeper\taller face that was a bit intimidating.  I decided to not wait for my friend to get on his bike to “pull me” through the jump and instead pegged the bike in 2nd.  Sigh.  I didn’t slip the clutch enough coming out of the turn and part way in the air knew that I was doomed.

Obviously I came up a bit short on the jump.  I didn’t have 100% commitment and just didn’t do things right.  Thankfully I didn’t get hurt from this.  I didn’t fall.  Just came up short, cased, and exploded my rear shock & linkage into quite a few pieces:

Earlier that day, I managed to tweak my knee.  I had messed it up practicing on the YZ250F earlier in the year, but apparently this day just aggravated things and I ended up not being able to walk by the end of the night.  I’ll spare you the racy photos of my bare legs and just share the link to the following MRI\x-Rays of my knee.  Doctor drained plenty of blood & gave me a piece of crap “knee brace”.  Thank goodness for having Insurance!

I managed to score a replacement shock\linkage off eBay for a handsomely 40$.  Not a bad gig.  Unfortunately, I was still on the edge of “being able to ride”.  Winter decided to set in, and I figured that to help protect myself even more, I would pull my bike apart, sand blast the frame, powder coat it white, and toss the darn thing back together.  I did this for a couple reasons.  My frame was rusty.  I have a large enough sand blaster to blast my frame.  And I have a friend who can Powder Coat stuff the size of a car who happens to be storing a bike in my garage…..So it cost all of Free99 + my time.

So my frame went from looking like this rust bucket:

To looking like this work de art (disregard the pile of CR below the frame): And as such the bike went back together ever so nicely:

I will continue on this later, but figured I would give a precursor.  I’ll list out the things I have done, things I’m doing, and attempt to put whatever full specs I can up about my rig.  In the meantime, feel free to check my site for other info: www.AndrewGore.net 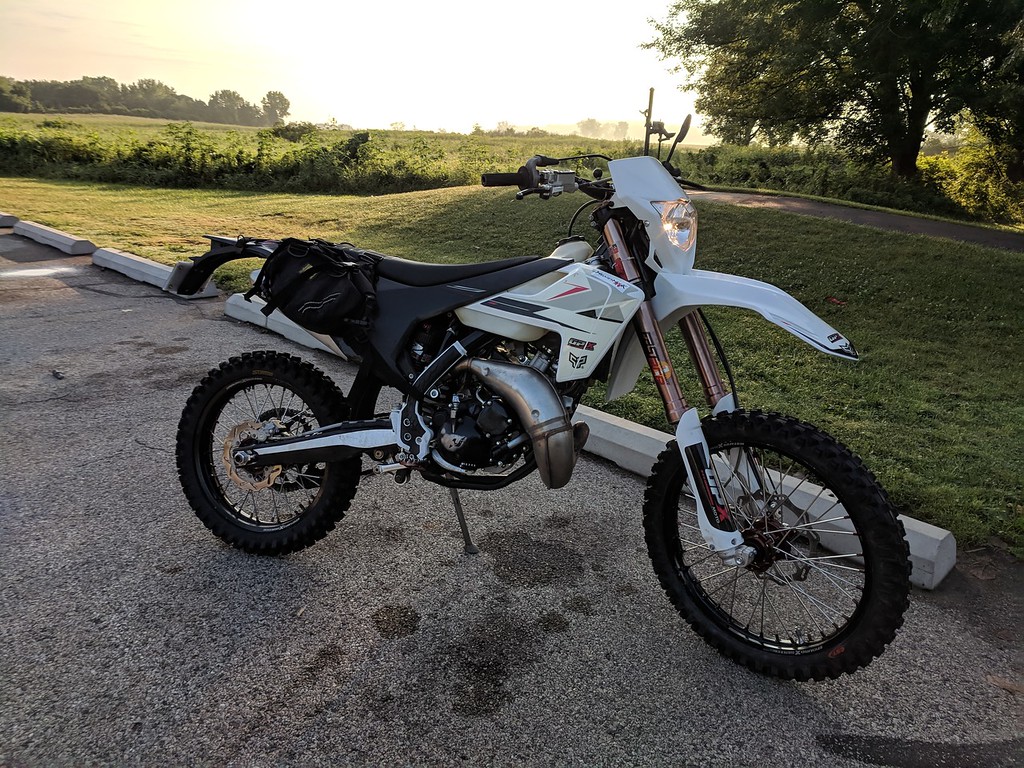