I had sent my Ride Report thus far to my brother who after a quick discussion sparked a bit of introspection on this ride. Looking back on what I wrote about Day 2, I felt like what I wrote was rushed. Recalling back however, this is pretty well inline with how Day 2 was for me. Day 2 was filled with what was the core of the best riding areas of the TWAT. At that point, we were out of the flat open corn fields of Illinois, and were winding our way up and around the Driftless area of Wisconsin. Not only that, but we were bang on track for riding the trickier terrain of the Black River Falls area. By the time we got to the Black River Falls area, Caleb was zonked, I was feeling the affects of riding a KTM 350 for quite a few hours straight, and I was getting sick of Dust. Not only that, but as the day wore on, we were all relatively indecisive about where and when to stop. The day was just a rushed one, but that is more or less the story of this trip. A lot of distance covered in not a lot of time. That was OK though, because tomorrow would be a new day.

We woke up relatively chipper in the morning. Our camp site was more or less a staging area for some ATV Trails. As I noted before, I was a bit concerned about us riding on the ATV Trails, as at this point with our non-existent internet access, we were unable to do some online reading through the evening. We went with our gut, and figured that if the publicized TWAT had us navigating on some of these trails, we would be OK. Looking at my GPS, I hadn’t realized how close we were to the end of the TWAT. We did some rough math, and figured that we’d be at the end by noon.

For me, it was a nice refreshing way to wakeup. I’m plenty comfortable on my bike in just about any condition (aside from ice, unless I’ve got studded tires), so despite having a street oriented dual sport tire setup on my bike, and the somewhat slick ground conditions, I was really enjoying myself. The sky was slightly overcast, the trails were winding, with the right amount of dirt\sand mix, and I found myself able to ride a brisk yet comfortable pace.

After the ATV Trails, we wound up at Rustic Road 111 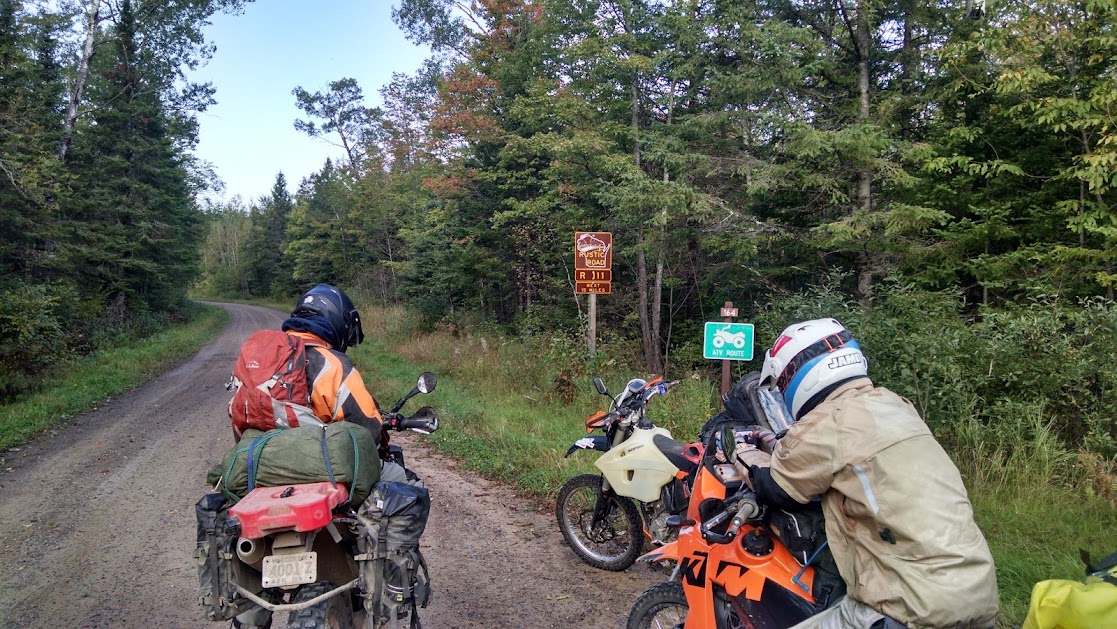 Now at this point, we were I dunno, 50-100 miles into our available fuel. I hadn’t been worried on my 350, as I’d been get 55-60mpg, and had 4 gallons of fuel. Jameson’s 950 was holding plenty of gas, but Caleb was beginning to worry about his situation. He had done the TWAT the year before and was concerned about a section which was muddy, and which he rode…..at night. It was early morning for us, so I wasn’t concerned about the trail conditions, however, I don’t like having to tow bikes due to running out of fuel. At this point, we pulled a bit of an audible and took a straight shot North on Cr-GG to refuel in Clam Lake.

Cr-GG for me, embodied the essence of the trip. The morning air was calm. The road was lined with beaufitul trees as far as you can see. A feeling of “being out there” began to fall over me. With my 350 humming along at 60mph, I had felt what I’d been looking for with this trip. I knew we weren’t far from the end, but this section just felt right. On top of this, we were graced by the quick sight of a wolf running across the road. I had to rethink this over, as my mind kept thinking, was that a coyote….no, much too large for that to be a coyote. A wolf, a desolate road, with calm cool air. This was where I wanted to be.

Like all good things, this road soon came to an end. We refueled in Clam Lake, and set off North once again. Unbeknownst to me, I would soon lose my SPOT Tracker shortly after this fuel stop. From Clam lake, we worked our way up to the Delta Diner. Yes, the silver restaurant near the end of the TWAT. 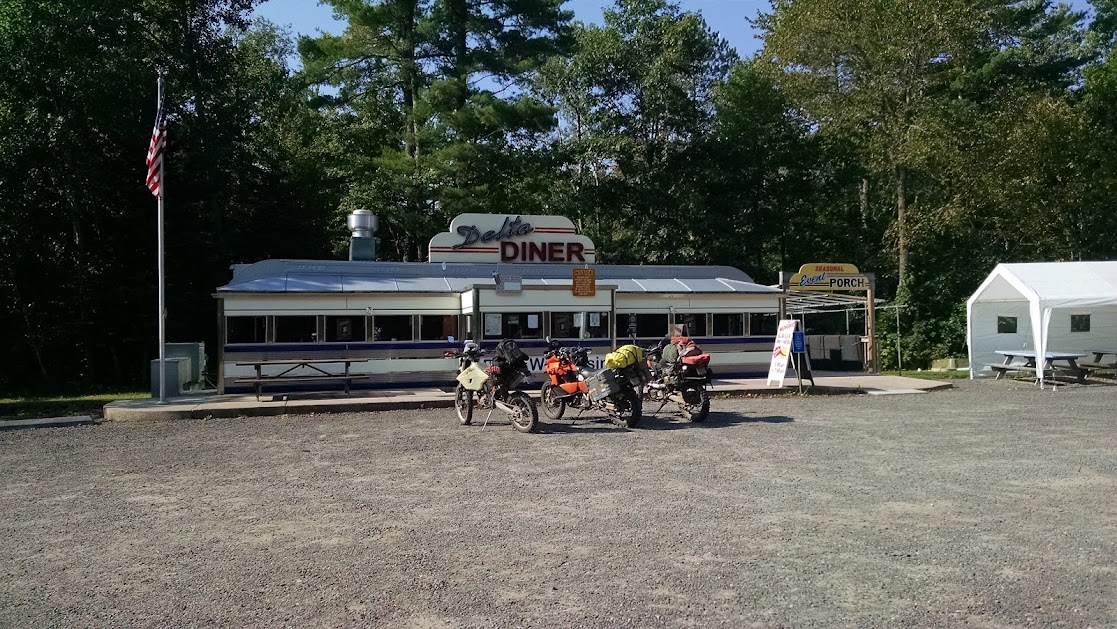 You can likely tell from the picture that we were the only ones there. Lesson learned was that they are closed on Tuesdays. That’s ok, cause we weren’t really hungry at this point. In my mind however, we were only a few miles from the end of the TWAT. As it turns out, this isn’t quite true. We still had a few miles to go. After the Delta Diner, there were some awesome fun sand roads. I know, a lot of folks hate riding sand. You gotta embrace it. There is nothing quite like riding full throttle, railing turns, just locked in like you’re Bob Hannah. I love personally love it, but I suppose years of riding the sugar sand of Michigans UP will do that for you. A bit further down the trail, and we had our first glimpse of Superior 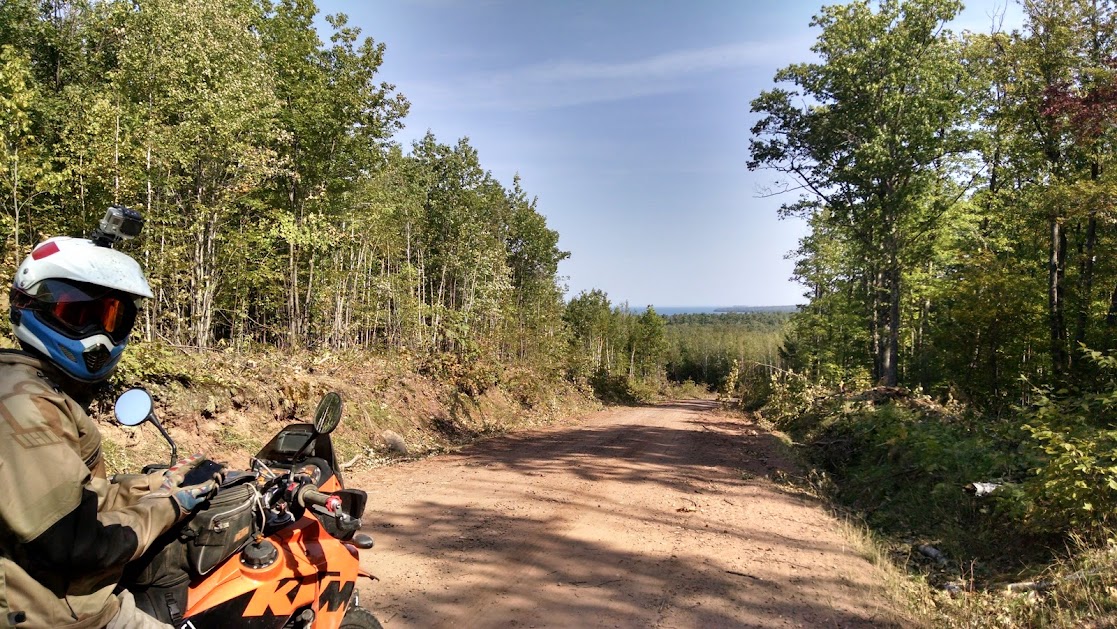 Around 12:30, our projected time, we reached….The End. Holy anti-climactic Batman. I kid you not. We thought we got to the wrong spot. We were at some sandy dead end road. Jameson took the lead, and found there was a short maybe not so legit trail to climb down to the shore. Sure enough, we found ourselves on a beautiful set of large rocks, crystal clear Lake Superior water, and some vintage graffiti to enjoy a snack. 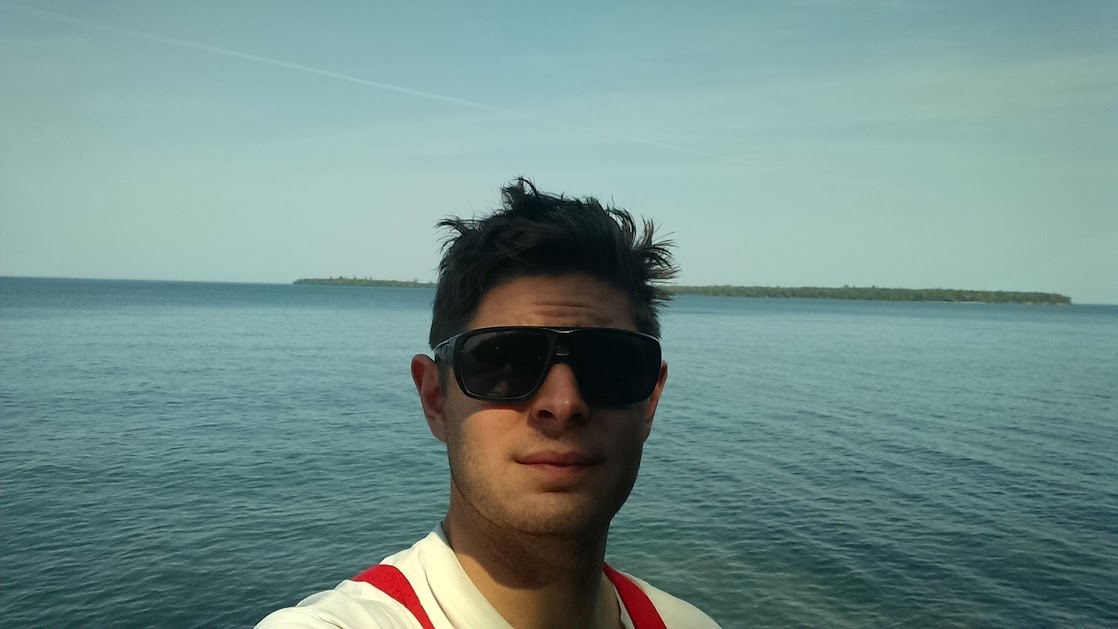 It’s just after noon. The sun was baking on us. And so the talk began. Were we or weren’t we going to jump into the water. I know I needed a shower, but dipping my hand in the water….yup frigid. What the heck, let’s make this trip official. Off came the riding gear and with a run on some slipper rocks….off we jumped into the water. Hells horses was that cold and refreshing. Sure, I was only about 10′ from the rock itself, but sweet word, that water sucked the breath out of me and I felt I was a mile away. We spent the next 20 minutes or so making random leaps into the water. Each time claiming it was getting colder and colder trying to find a more convenient way of climbing the rocks to get out, without looking like a beached shamu whale.

After enough shinanigans, we felt it was time to move on and work our way sadly South. We knew we had skipped some sections of the trail, so figured that we’d snag these on our way South. We had the time, so why not? Our first order of business was to get gas in Redcliff, and zip South through Bayfield and on into Ashland, WI. We stopped in at the local Wal-Mart. I stocked up on some ramen\water\etc (also grabbed myself a fancy new coffee mug). I wanted something to eat, so talked the group into going to the local Culvers. This was a good choice, as my subconscious had reminded me that Culvers are pretty good about keeping their restrooms clean…..ideal for someone who isn’t overly fond of pit toilets and what have you (hey…..I got attacked by a bat in an outhouse….that’ll scar anyone

Jameson, in his infinite wisdom snapped a picture of us as we were to set off from Culvers. We left culvers according to my phone at 4pm.

I’m not sure if it was at this point, or when, but we began heading south. It’d been a good day of riding thus far. We were heading South, and figured we had plenty of time. It was when we went to refill with fuel at Clam Lake (again) that I realized that I had lost my SPOT Tracker. 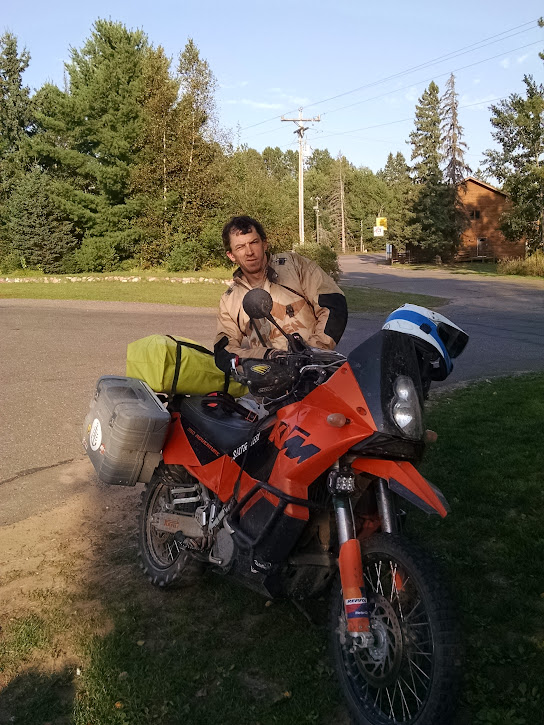 I did some critical thinking. According to my phone, my SPOT was just up the road. It was roughly 5:15pm, and I wasn’t communicating very well with Caleb & Jameson. I (in my mind) explained to them that the SPOT was thankfully a couple miles up the road. I said I’d go zip up the road, and look for it. I thought Caleb was fixing something on his bike, so felt I had plenty of time to go up the road, find the device, and get back to the gas station, where we’d rendezvous to then find camp.

I get to where the SPOT is supposed to be, and yeah….I’m not seeing it. I got a bit worked up with myself, because, it shoulda been there, and how did I lose it, and I’m tired, and insert long list of reasons here. I went up and down the road & trail looking for it. I decided to put the GPS coordinates into my Garmin, and see if maybe I was looking at things wrong. At this point, my Garmin tells me the SPOT is like 20 miles straight line away, at what looks like a persons house. I kept thinking, how the crap could the SPOT’s reported location be so far off from what my Garmin showed. Meanwhile, my phone was bouncing in and out of reception, and I’m getting text messages from Jameson\Caleb that they don’t know where I am. Then I get one that they’re going to look for a place to camp, and what have you. It’s getting mildly darker, I realize I’m becoming impatient about my situation, so decide…..who cares about the SPOT, let’s go meetup with the guys, and enjoy camp.

I zip my way back down the road and stock up on adult beverages at the Clam lake gas station, and end up meeting Jameson & Caleb at Day Lake Campground. Go figure, we manage to pick a spot where the past campers decided to dump their gray water. Thanks wankers. They did leave us a nice empty bottle of Smirnoff with some flowers in it.

Only about 800ish miles in: 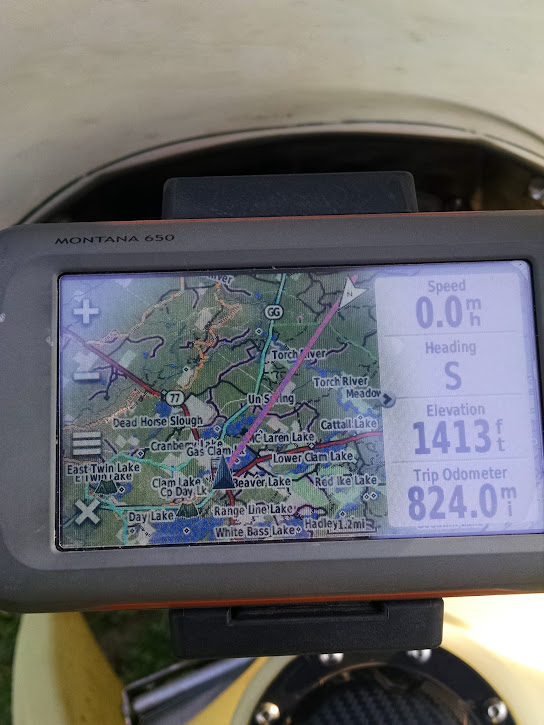 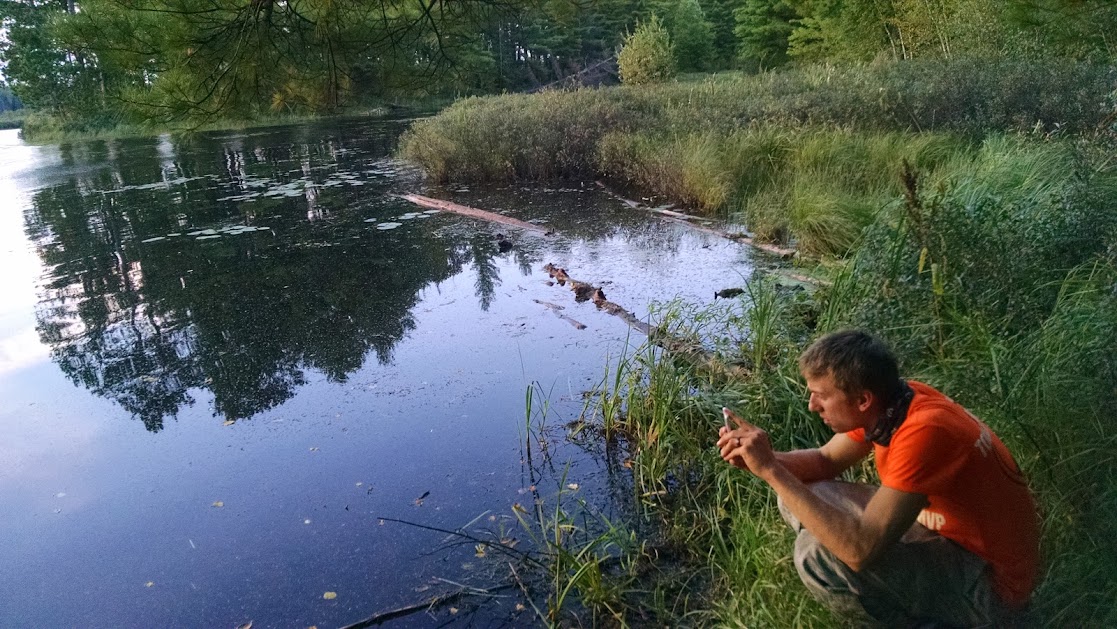 The lake was calm, and very relaxing: 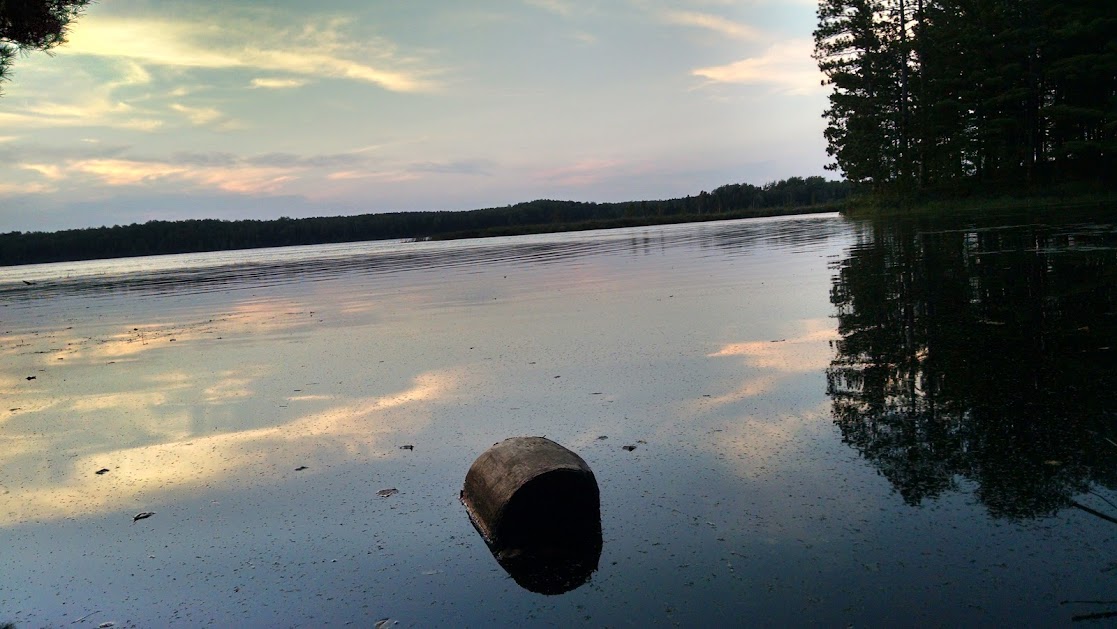 We setup camp, got a fire going, and retired relatively early. The wind had picked up pretty good. Caleb told us to hop into his hammock to see what it was like. It was an awesome view of the clear sky and bright stars. That said, with how much the trees were swaying in the wind, I’m not sure I coulda slept in that all night. On the ground, in my tent for me. 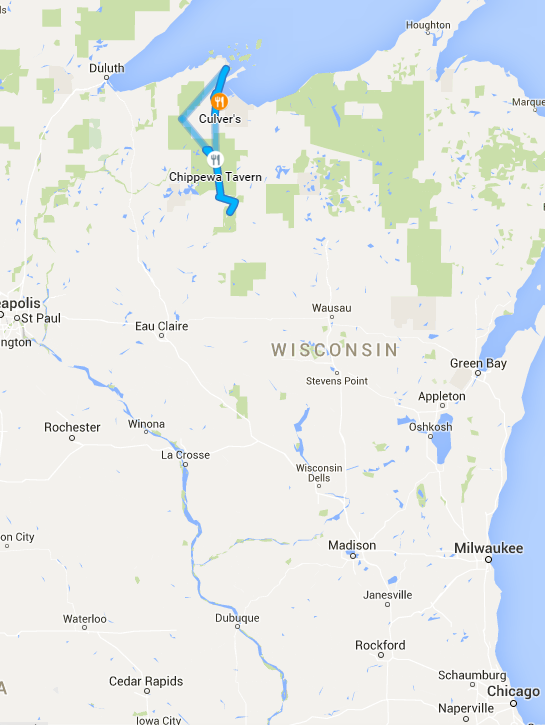