Skip to the content
Day 5 (Thursday) – Gays Mills, WI back home.
All good things must come to an end.  My forks (which had been leaking since day 1) would thank me. 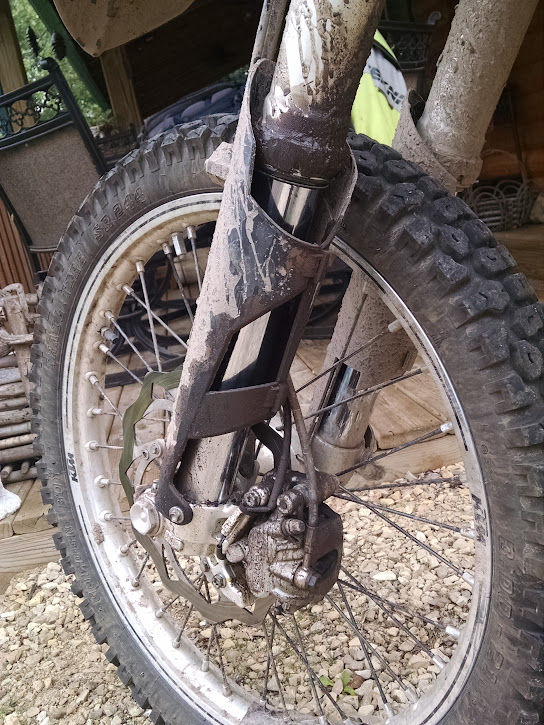 I woke up plenty relaxed after a relaxing evening.  I had all day to get the 180 miles (taking highway) home.  I was in no rush, and for the first time on the trip, I was flying solo.  Caleb had his 690 loaded on his trailer, Jameson was off in Minneapolis and on his way to ride some more at Black River Falls.  I had a general idea of how I wanted to get home.  I wanted to just work my way west, and around Janesville area, work my way to State Line Road, follow that home, and end up in one piece, with no issues.
I snapped a couple quick pics before I left my parents. 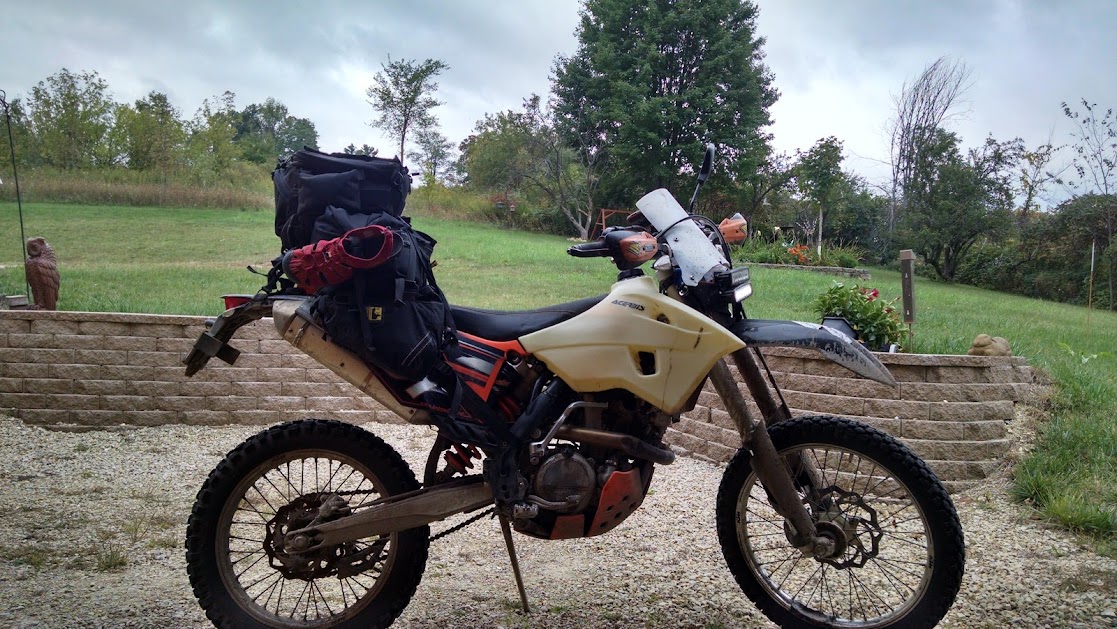 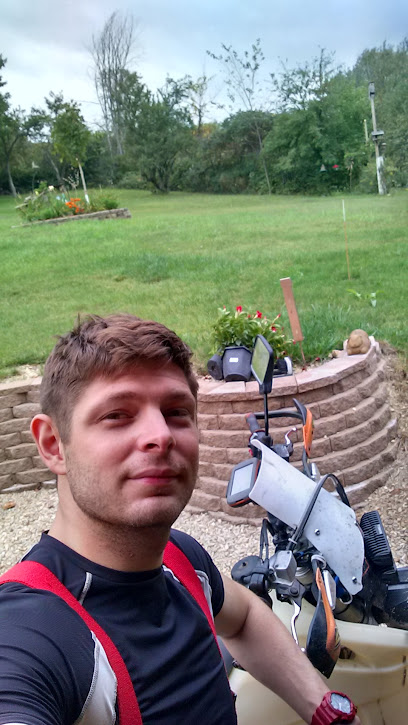 The sky was overcast, I was stocked up with random snacks in my tanktail bag, and I was excited to be back on the familiar Seat Concepts seat.  I decided to ride South on 61 until I got into Boscobel (South of the Wisconsin River).  Normally when driving out this way, I stay North of the River.  I figured I’d switch things up a bit.  What a great decision.  As soon as I began exiting out of Boscobel I saw what looked like the perfect off-shoot to take.  I found myself winding through old farm lands, weaving into darkly lit tunnels of trees with a fresh feeling of early Fall in the air.  No sooner was I enjoying the ride, when the sky opened and began a light rain on me.  I didn’t care.  It was part of what I was riding, and with the time I’d spent on my bike in the past few days, every move I made, I felt one with the machine.  No concerns that I was riding over wet leave strewn roads.  I was in my element, a very happy place.
This twisting and winding went on for a good hour and a half.  Look over there, yah that road seems good, let’s take that.  Where does this one go…..OK, let’s find out.  So I continued on attempting to somehow delay the inevitable of more open corn\farm fields and the reality of getting back home.  That was OK though, as I was feeling accomplished.  Thinking in my head, just a few days prior, I had just started to ride out this way, pondering……will this little 350 single do this?  This high strung race bike, how far away am I going to be when something on it pops.  Who’s gonna take one for the team and drive my truck way out here to pick me up.  It never happened.  My bike without a hiccup was doing everything (and more) that I asked of it.
The rains eventually began to subside, which gave me time to stop and enjoy an early lunch snack. 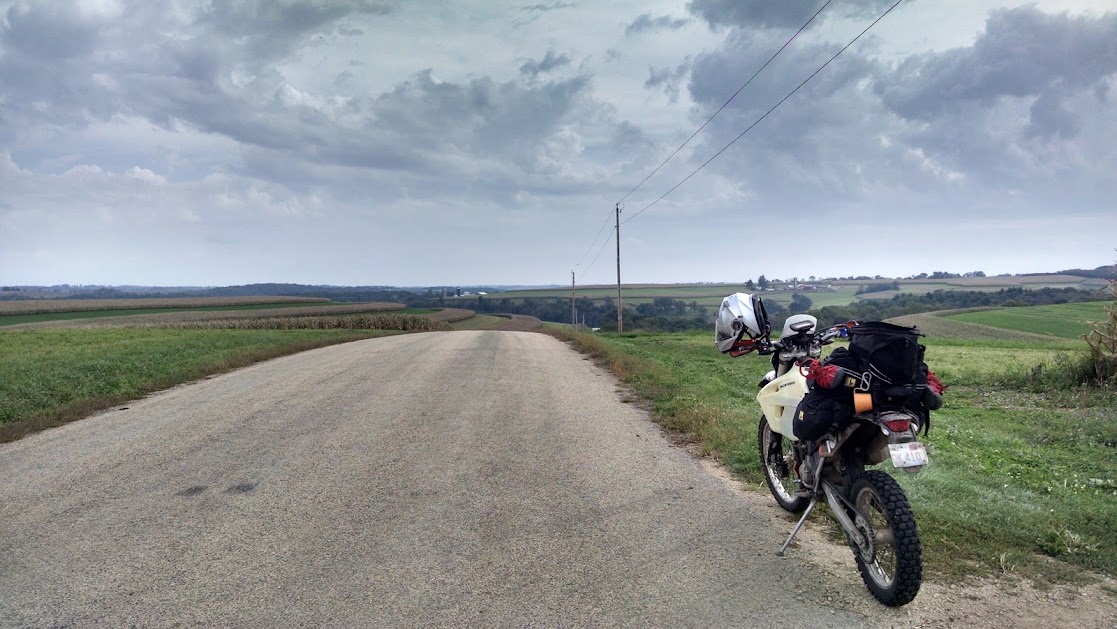 I ended up only stopping another time or two on the remainder of the trip home.  My bike at some point needed fuel and I needed another round of gas station food (pop tarts and nutbars).  I really found myself enjoying the scenery.  Yes, it’s open corn lands, but there just seems to be a calm in it.  Nobody around, just the delicate wind to keep you company. 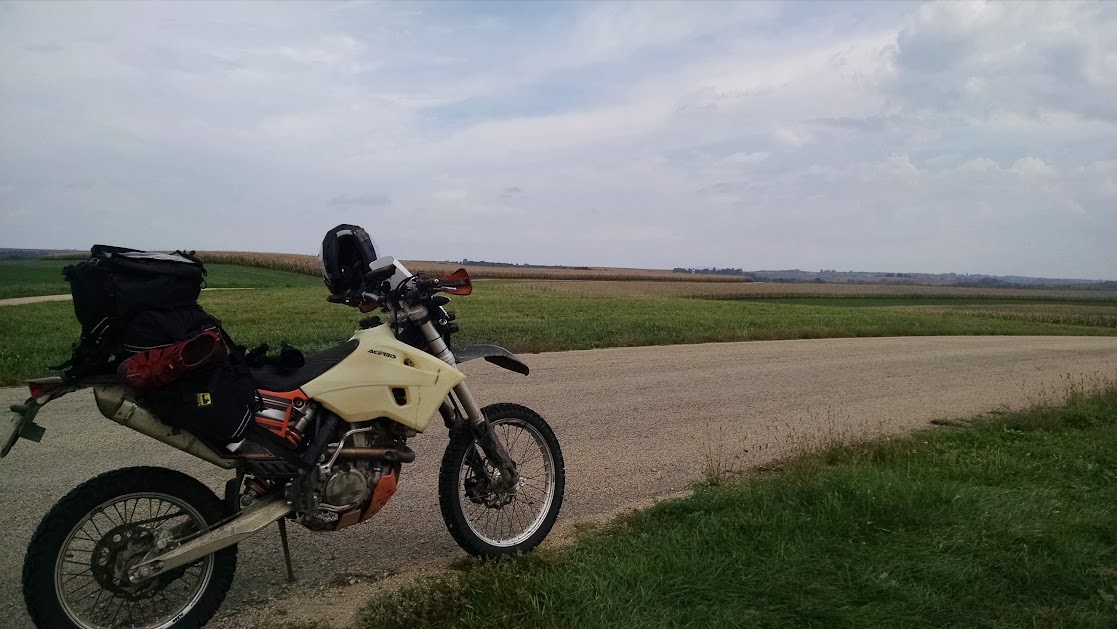 With that, I found my way home.  My wife was at work, so I was greeted by my pup.  You can see my eye was still bugging me from the mosquito incident early on in the trip. 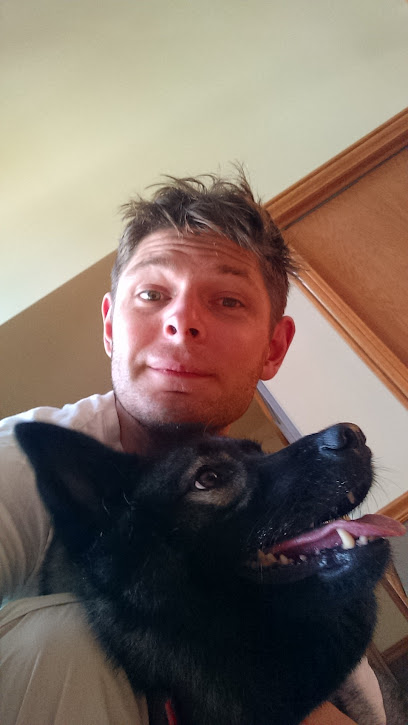 My total tallies were in….GPS Total: 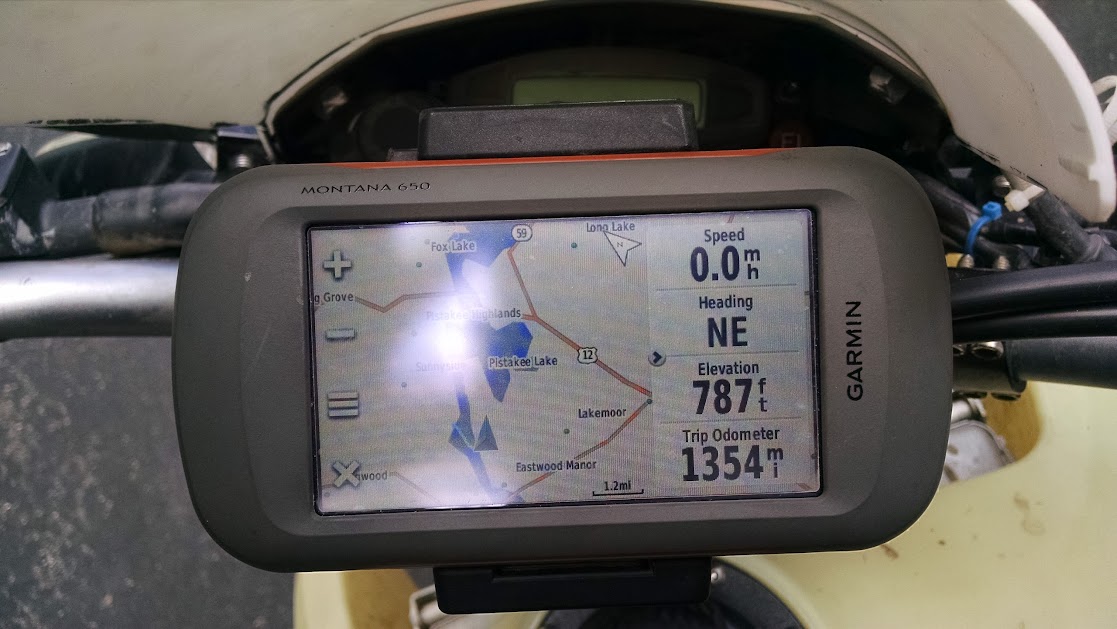 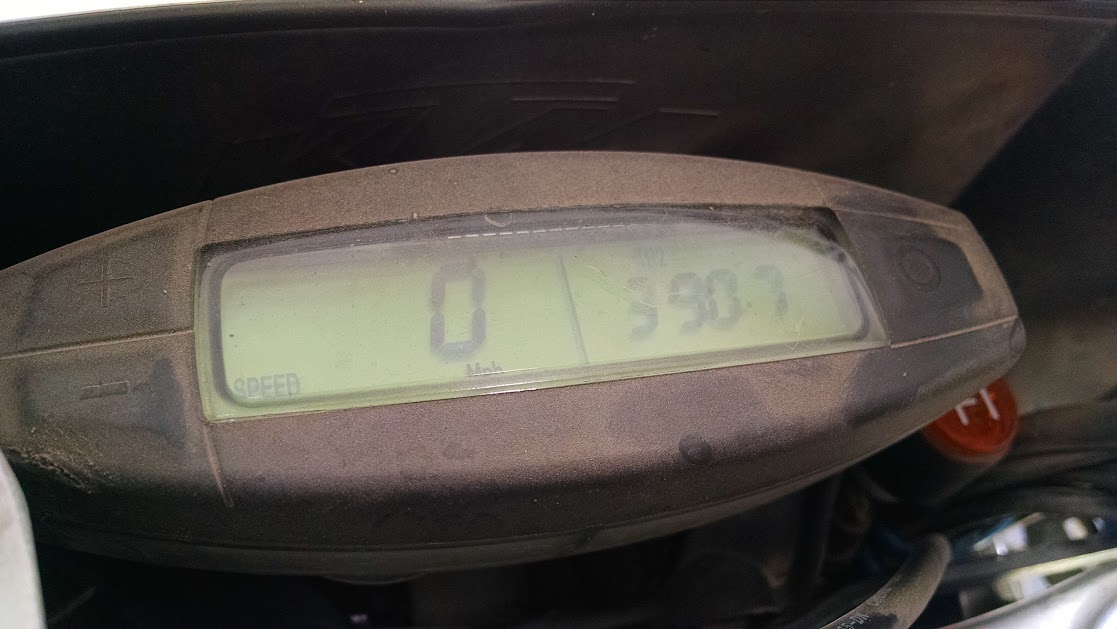 Left at 11:30am Sunday, and was back home by Thursday 2pm.  Right around 4 days of actual riding time.  Awesome.
With that, Day 5 Map: 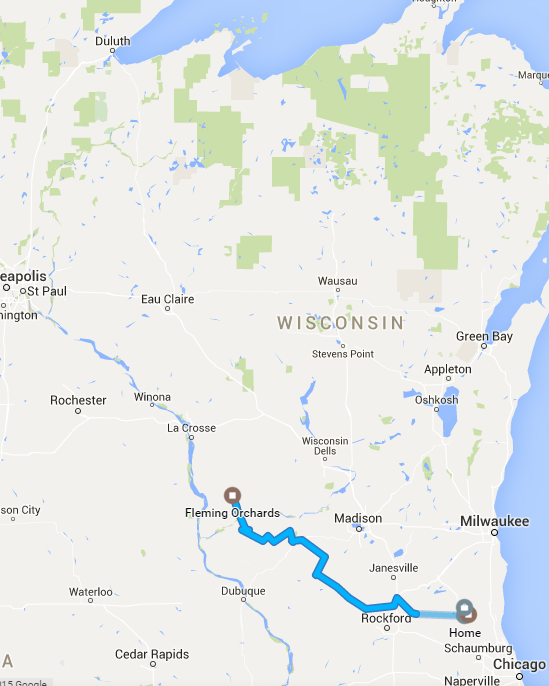 For me, I could have continued riding this stuff for the next several weeks.  I’m sure anyone else would say the same.  I had been wanting to do a trip for awhile where I ended up in a new location each night.  There is something exciting about not knowing exactly where you’re going to sleep.  What you’ll do for food, what kind of fun you’ll run into as you cruise down the road.  I knew going into this ride that the little 350 was far from an ideal machine.  I didn’t care.  If it blew up, I’d deal with it.  It wasn’t the most comfortable of bikes, but is motorcycling ever about being comfortable?  For me, it’s not.  There is something about being open and vulnerable to the elements and being that much closer to your surroundings.  All that said, for a ride like this, I’d love a bike with a bit more giddyup.  Had I of been able to cruise more comfortably over 60-65mph, you could really cover ground a bit quicker.  It’s ok.  I wouldn’t hesitate to take the 350 on this trip again, and would gladly hop on it tomorrow to go ride the same thing again.
This is a ride that anyone in the Midwest area should add to their list of rides to do.  There is nothing inherently technical with it.  If you’re not a fan of sand, there really isn’t all that much of it.  There are some ATV trails, but if you keep your pace reasonable, they’re nothing to be concerned about.  One thing that I found after this trip was that my ability to drift my bike went through the roof.  I’m not sure if it was the hours of fun on gravel roads with (in my eyes) glorified street tires, but I rode an Egg Hunt race not long after on the 350 (albeit with knobbies) and was so confident in riding with both front and rear wheel sliding out on me.  I couldn’t have been happier.
Post ride, my only real complaint was with my Garmin Montana.  I don’t know actual times\mileages, because as soon as I hooked my GPS to my computer, it freaked out and I lost all my data.  Kinda crappy to happen after the units first use.  Garmin stepped up and sent me a new unit, so all is well…just no data.
And so it ends.  I’m looking forward to spending some time this next year scrambling around the Driftless area.  I foresee several more trips to the area.  That much is true.
For a few other random pictures from the trip see:
Picatures Here
Andrew 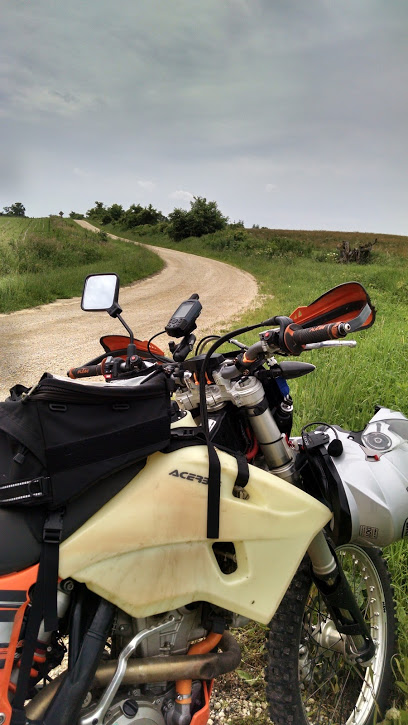 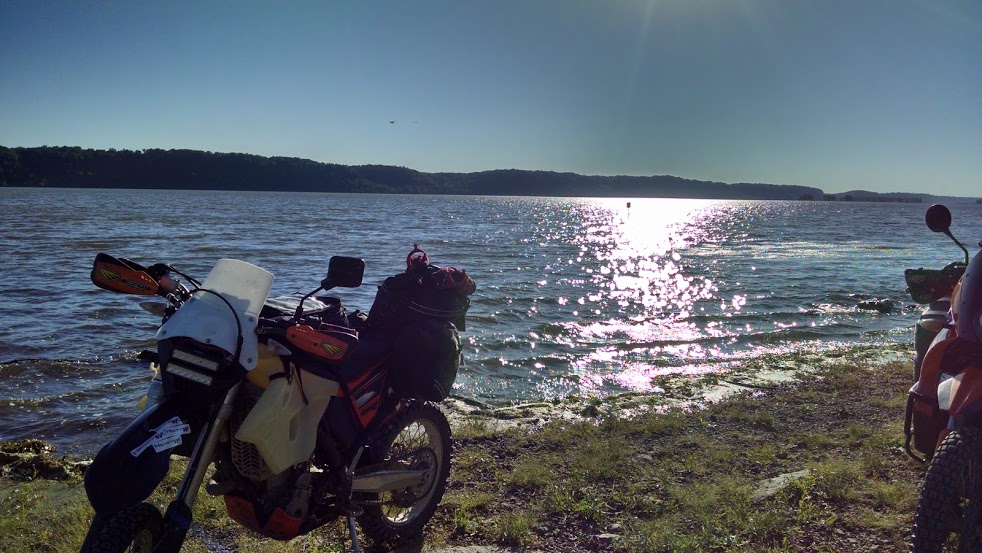