Rustic Roads Loop 2This past Tuesday I wanted to get some more Rustic Roads in. IIRC, the weather was iffy in the morning, but leveled out by the time work was done. I topped myself up with a dinner of refried beans, chipotle cranberry cheese, kale, all upon a wonderful Udi’s gluten free spinach wrap. Health conscious and all that

. I geared up and I was off……to fillup with gas. Here was the rough route: The map is a little off. I wanted to get away from the main area as quickly as I could, so I hopped on Rte 12 North and set my mental cruise control to get up and away from the local area. I really enjoy being able to make quick time on these roads in Wisconsin. The minimal traffic, wide open roads, 65mph speed limits, and all, it adds up for making up quick time.I wanted to take a more back way into the first rustic road, and so I kept south of 12 just as I got past Elkhorn. I found some nice roads that while not the windiest, they were still scenic in their own right. I was basically right at the very South end of Kettle Moraine. There was a nice spot to stop for the Ice Age Trail. If you’re into walking\hiking in the woods, this is supposed to be quite nice. I’m not a fan of walking, so any time I’ve spent in this area has been on their Mountain Bike trail system just north of here. I stopped here for a quick restroom break: 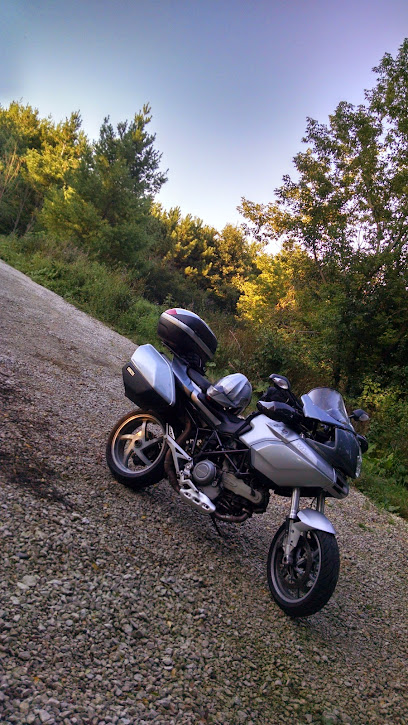 I then worked my way up towards Whitewater. I forgot that they are still doing construction in the downtown area. If you’re in the area, check out the Sweet Spot Cafe. They do great coffee and they may or may not have delicious pastries & snacks

My wife & I like stopping in as they do have a good selection of gluten free items if that’s how you roll.As I worked around the construction, I ended up riding around Whitewater college. It was kind of odd, as the only real memories I have of being in that area were from around 2001\2002 when a band I was in at the time recorded with a friend who was a DJ for the college radio. While I’m not in any bands anymore, the guy who recorded us is, and they’re pretty darn solid. Check em out:

https://www.youtube.com/watch?feature=player_embedded&v=qgXEoYptqc4I worked my way out of town and hit the first rustic road for the night.RR 88: 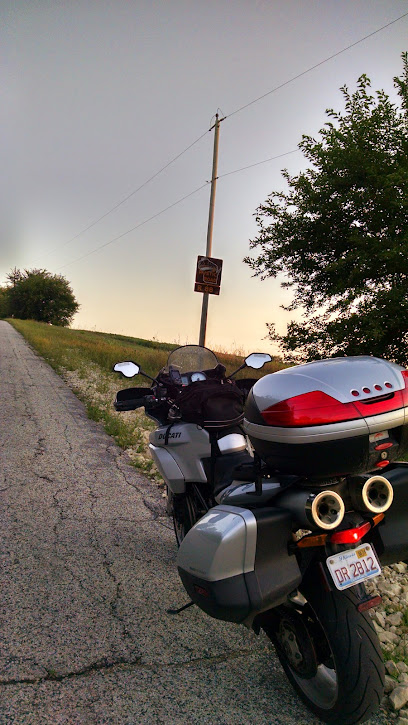 This was a mostly straight road. Nothing super about it, but it got me in the mental mindset for chasing down the signs. I’ve noticed that some roads have the # designation at both ends of the road. Others, it’s only at one end or the other. Then there are some that as noted before, have nothing. It keeps things interesting. I reached the end of the road, and worked my way North to the next one. I saw an absolutely rundown road that seemed to be someones driveway, so I hopped on it. It was a real adventure….all 1/8 mile of it

A nice smooth road followed and I was then lined up West to hit the next RR.RR 84: 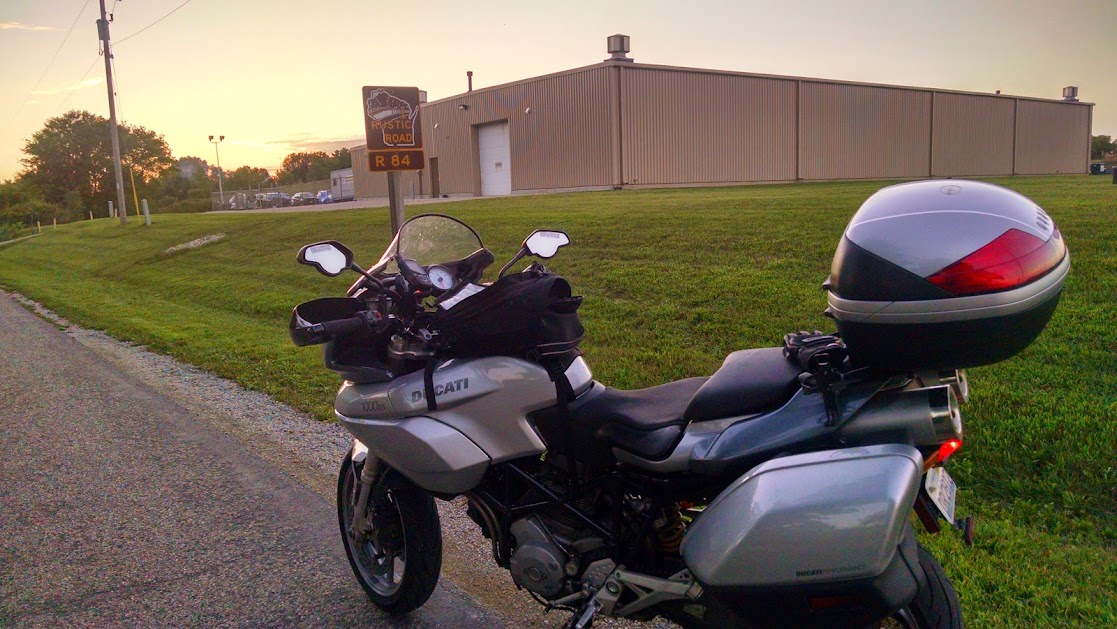 This road was mildly populated, but on the West end worked its way around some mucky looking river\creek. I didn’t hang around there too long and really shoulda snapped some extra pictures. I’m seeing there is a minor flaw in my attempts at snagging as many RR signs in an evening, after work, while trying to get home early enough to get enough sleep for work the next day. Minor details.After 84, it was South from Fort Atkins to catch RR87. This one based on the map had some promise to it.RR 87: 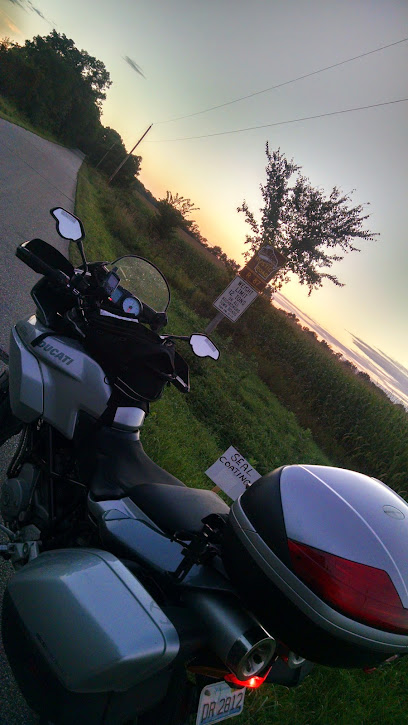 You could even get your Seal Coating done here. Though there was no phone number.

. This road was quite fun. It wandered along quite a few farm areas. I think one road was called Creamery Road. You could smell the pungent farm smell as you wound round the turns. Not really many sweeping turns, but some fun blind 90 degree bends that I seemed to go around far slower than in my mind I should be going triple digits through. The reality was also that the sky is darkening earlier and earlier. I had planned for 2 more Rustic Roads for this ride, but the last one would put me getting home around 1030pm. I don’t really mind the lowered amounts of sleep, but I know that deer & other wildlife were gonna be more prevalent now. It reminded me I need to add some additional lighting to this bike. The OEM lights are good, but I’ll never argue with having MORE lighting. At the end of RR87, I was greeted with a bridge under construction: 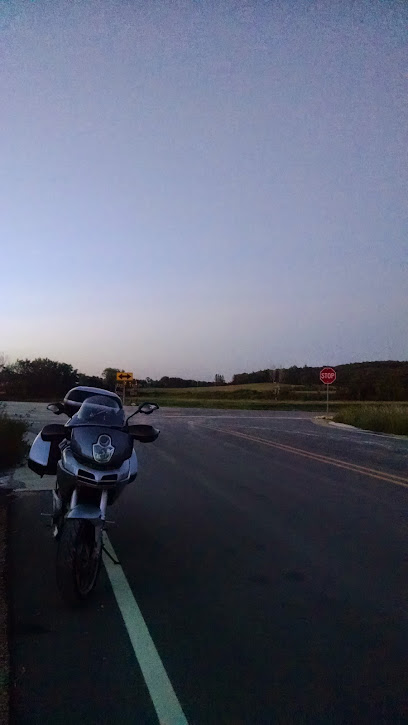 I had no reason to go over it, but every reason to hop on the highway just below it & zip on down to my last RR for the evening.RR 35: 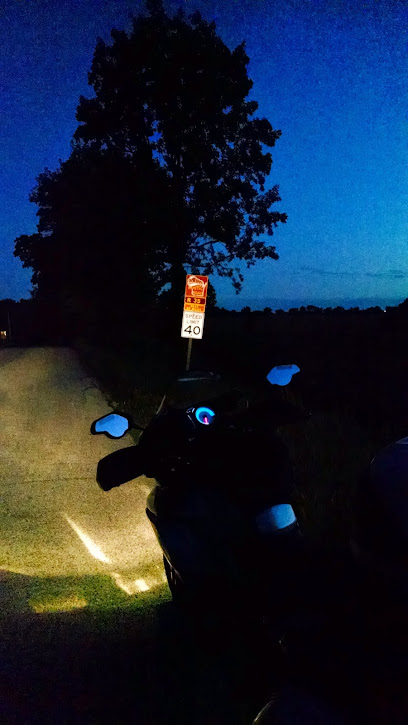 I had the high beams on for most of the time at this point. It was full on dark out, and I was out in the sticks so to speak. I snagged this last sign and began working my way towards Cr-M. Or at least I thought I was. I hadn’t realized that they were doing all this nice construction up there, so roads I thought were there…..were not. A minor detour later, and I was back on Cr-M (that road on the 45* angle in front of Harmony Twn). I used the moon, open road, and my high beams to my advantage here. I may or may not have made some really good time here. Towards the end of M, there were some nice smooth sweeping 90 degree turns. They had some minor elevation, and needless to say, I would have much preferred to do them during day time. I took what I could get though.The only issue I had on the route home was as I came to a 2 way stop after my making time on cr-M. It gave me a good sampling of the lovely Brembos on the Ducati. Oh how they grab and pull you top a stop. Just lovely. From here on out, I opted to hop on the main roads to get myself home. I figured there was a bit more safety from critters with this, and it’d get me home quicker. 43 North to 12 South. Both with 65mph speed limits. I set myself to cruise and got myself home.Trip mileage: 142 miles.Andrew