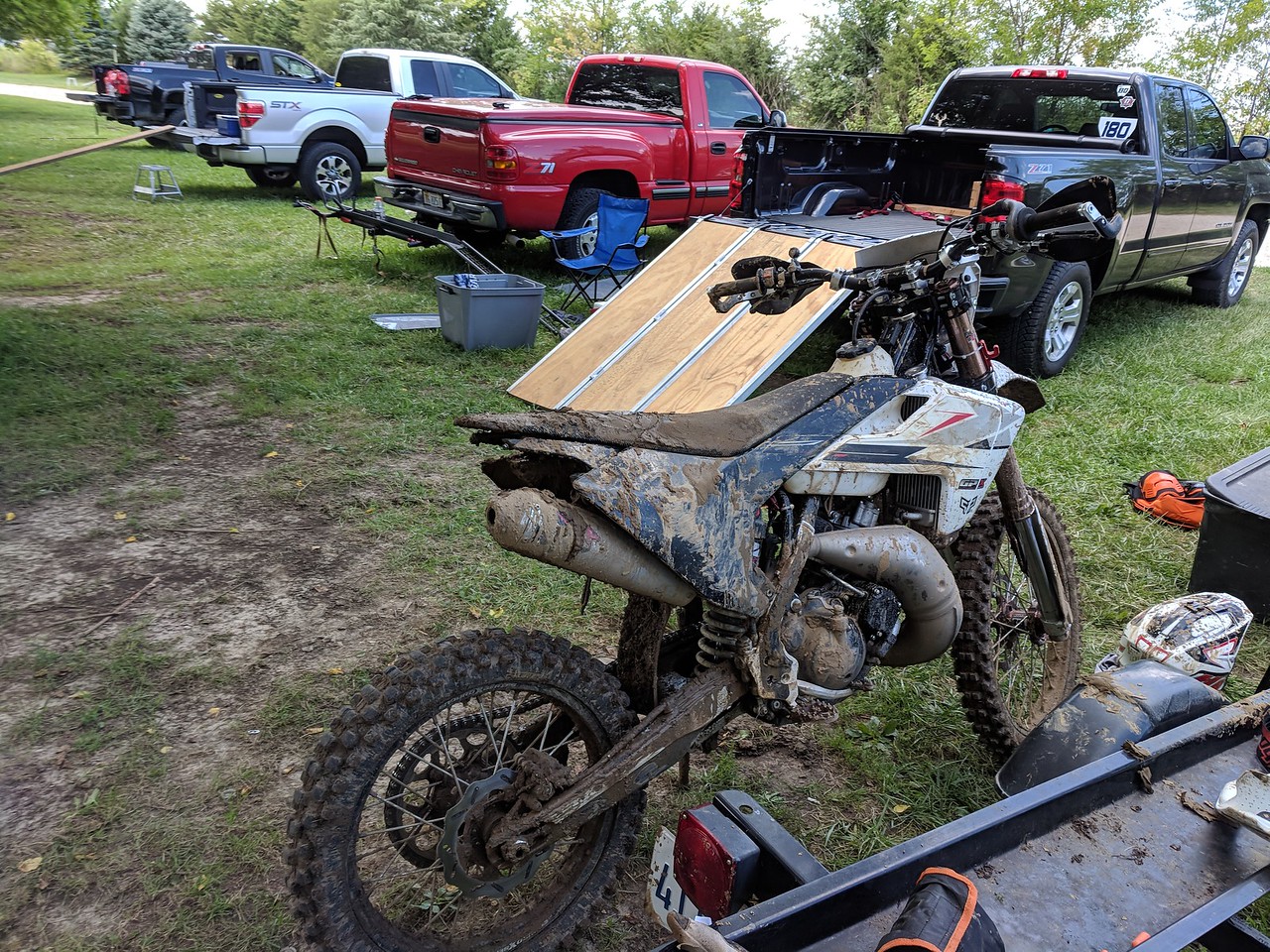 I was recently asked what I’ve been doing to have some of the issues I’ve seen. Much is likely self inflicted, I’ve got some riding friends who say I put some hurt on my bikes. I don’t 100% agree, but what yah gonna do. My reply to the question was asked follows ….
I’ve used it the same way I used my KTM 350 for nearly 4 years. Except in 4 years, 200 hours and 6000+ miles (including far more racing and street use), the KTM didn’t have a single issue this thing has had in under 30 hours of use. I’ve personally ridden the TSE offroad 3 times. I know Navin put however many hours on it before I got it, but still nowhere near the accumulated hours on my last bike.

First time, I put maybe 45 minutes on the bike before the rear fender assembly exploded due to caked on mud and me riding a very intermediate MX track with a license plate on the bike.

Second time, the bike randomly stalled on me on a moderately aggressive MX track, I assume my bad for somehow getting gunk in the carb. Fork seals also went that day and I should note that even at this stage my front brake was already inconsistent. I had one crash here on an endurocross tire when I lost arm strength and momentum and tipped over, though I don’t recall it hitting the side, and I don’t recall (or see in any of my pictures) of a failed subframe at this stage. I’ll go through my reference pictures to see if something pops up.

Third time, you can watch the video because it was my race. I noted earlier at what time the shifter gave up the ghost. If you want, you can watch before that and see if I did something. Maybe I looked at it wrong, or attempted to shift too quickly, I don’t know. Things you don’t think about when you’re racing, and in the past 8 years of racing, not once ever thought about. There’s the brake issues as well, though as I’ve been perfectly open about, the failing fork seal likely attributed to my lack of front brake feel, but the rears were inexcusable.

I got the messages from GPX regarding the plastics. I was curious on their cost as yeah I had saw that the OEM Husky stuff comes in at a heft 440$ (with new associated hardware). A tough and bitter pill to swallow on a bike that is rapidly & continually pushing North. My issue with the GPX stock parts is what I’ve noted before. The manufacturer may have copied the Husqvarna stuff, but they skipped over the critical details, which to me are make or break. Every single threaded insert on the GPX appears as though it is a round turned part, presumably with knurling. Many threads so far have seemed undersized (causing bolts to get stuck in them), and my personal guess is that they are not molded in, but likely heat staked in post-molding. I can’t confirm 100%, but given that many are in blind hole areas, overmolding that can be tricky. Doable, but tricky. Why they didn’t use hex stock, or add some sort of undercut detail to help retain the threaded inserts, I don’t know (related to whether or not they’re molded in vs heat staked). I have my assumption.

Threaded inserts aside, you then have the exact material makeup. I assure you that as many metals you know about, there are 10x as many plastics. Each plastic just like metals can have different flexes, rigidity, slip, all that stuff. I can’t say on the subframe how it matches to the OEM Husqvarna parts, but with absolute certainty the material used for the fenders is different. Not only is it different, but key areas where they should have molded in pieces of aluminum for added strength was not done. Again, I assume to hit a price point and the possibility of not understanding the importance of these things.

I’m appreciative of the fact that GPX has these parts in stock and at prices lower than the Husky parts that were copied. Unfortunately as I’m finding (and apparently alone in this), but the low price is proving the old man saying of “buy once, cry once”. As I noted earlier as well, I’m getting to the point of being ready to toss in the towel and admitting that this is not the right bike for me at this time. Unfortunately (for me) GPX has kicked the price of a new 2019 down so low that resale on these is (assuming) sub 4000$ range, given a new one can be had for $4500. Kinda wild considering that the bike was just released less than 6 months ago? It’s sadly putting this closer to the territory of a disposable item. It’s a shame as there was (is) much potential for this.

But like you said, I’m 1 of 700 of these. Maybe I got an oddball, or the first off the line. I don’t know. Maybe I just have crap luck with bikes and needed to perpetuate my Buy High, Sell Low Mantra. Like the Yin\Yang, maybe I’m just on the downside of that.

I’ll be getting this one buttoned back up, and contemplating whether or not I take it to the Brushpoppers event and how I am going to move forward from here on out. As I said above, there is much potential, but for me at this time, it just may not be the right fit.

All that aside, has anyone had any feedback regarding the oil injection pulley not lining up to per the DT230 manual? 3 bolts & a twist of the grip to check. Maybe something changed along the way, but the only thing I have to go off of is the DT230 manual.

An addendum to this is that I still praise the tse suspension. The motor is an absolute pleasure. At the price point these bikes are very hard to beat. I’ve likely had some first run teething issues and some self inflicted problems as noted.

From one 2 stroke to the next