John T & I arrived at Byron Motorsports Park promptly at 7:30am Sunday for registration.  Both of us quite excited despite the somewhat dreary skies.  As we pulled into the facilities, we were both a bit confused at the lack of gate attendant collecting gate fee, and the apparent lack of additional vehicles in the pits.  This was to be a race at a MotoCross facility, surely they would not cancel due to a few light showers in the AM.  We rolled on over towards the bathrooms and struck up conversation with another racer.  Oddly enough, our fears were confirmed.  the Club57MX GP Race had been canceled.

Weather forecast showed light rain until 830-9am.  Not bad, considering racing was to start at 9am (practice).  But alas, we were screwed.  We drove our hour and a half to be informed that MX has gone full NASCAR and was afraid of some rain.  So onto Plan B, or so we thought.  KI Tracks was just a few miles away and surely they would be open.  A handful of other riders discussed heading out there as well to get some riding in.  After doing some quick driving & quick Facebook investigation, we found that KI Tracks too was afraid of the rain and would not be open.

So what to do.  We all knew that Rocky Glen was just up the road, despite not really wanting to ride there.  It was the last and final option for us, so we figured what the heck.  They had just finished the week before, their “new” B Track.  It’s short, it was a bit sloppy, and had not been maintained one bit since the week before.  On the upside, Rocky Glen is open rain or shine and so off to riding there it was.

Like I said, Rocky Glen had done basically 0 maintenance on the track they had just finished creating.  The park manager (from all the times I’ve been there) doesn’t usually show up until sometime around noon, at which point, it’s unclear of what he is actually accomplishing.  The park seems to have a lack of ability in keeping riders informed.  It’s a heavy dose of “sign this, give us your money, peace out” sort of deal.  I’ve yet to hear any riders told that certain areas are one way, UTV’s are NOT supposed to be on the track (are they supposed to even be there in the first place?), Utility ATV’s are NOT meant for the main “MX” tracks.  Just a general lack of common sense things being relayed to the riders.

Yes, it’s easy for me as a paying customer to find things like that to complain about.  I’ve no idea what the operation actually runs like, I’ve no idea who actually owns the place, and how they feel things are operating there.  I do know though that as a rider on the tracks, it is annoying dealing with riders who apparently have no clue as to how anything works.  In the rare occasion  that someone is doing maintenance (I’m using this term loosely here) on a given track, people feel the need to continue riding while there is a big machine in the way.  Not only does this make things a royal PITA for the individual working on the track, but the safety issue is just huge.  On top of that, you have riders that feel the need to ride on\off the track at whatever area they see fit.  Now that is not really an issue, until you have riders that feel as though they can cut across a track at any point in time.  I can’t even count the number of times on my hands that I have had riders cut in front of me, or worse being going the opposite direction as I come around a turn, or landing from a jump.  Completely unacceptable actions that unfortunately can be tied to riders having NO clue about anything, and the staff not even remotely saying anything to them.

But hey, this wasn’t meant to be a rant on things I feel are wrong with Rocky Glen (though I feel they need some SERIOUS improvement).  The 5 of us got to put in a good amount of laps, and by noon, the track was getting plenty tacky and allowed for some good riding fun between Jam0 and I.  I got to roost Jameson plenty good, so that was a nice positive end to the day.  My bike felt great, and it has left me for wanting to push myself more and get even faster.  Can’t really complain about that.

ps – I failed at tossing the gopro on my helmet Sunday.  Jam0 has some pictures, so I’ll relay those when I can. 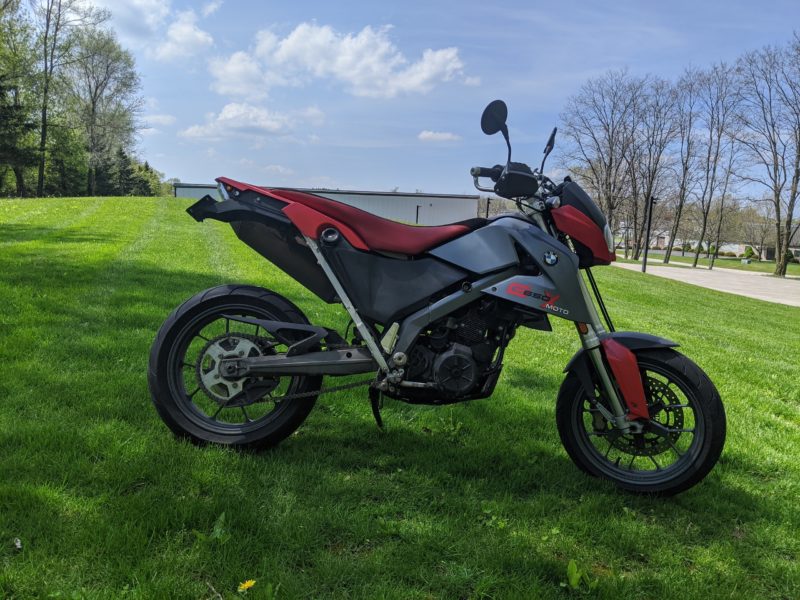